eXXpedition Round The World

One month ago, on October 8th 2019, eXXpedition Round the World set sail from Plymouth on a two-year, thirty-leg, voyage and scientific expedition. A total of 300 women from many different nations, vocations and walks of life will guest crew the 73-foot vessel, the S.V. Traveledge, over 30 legs, sailing alongside the small professional crew. 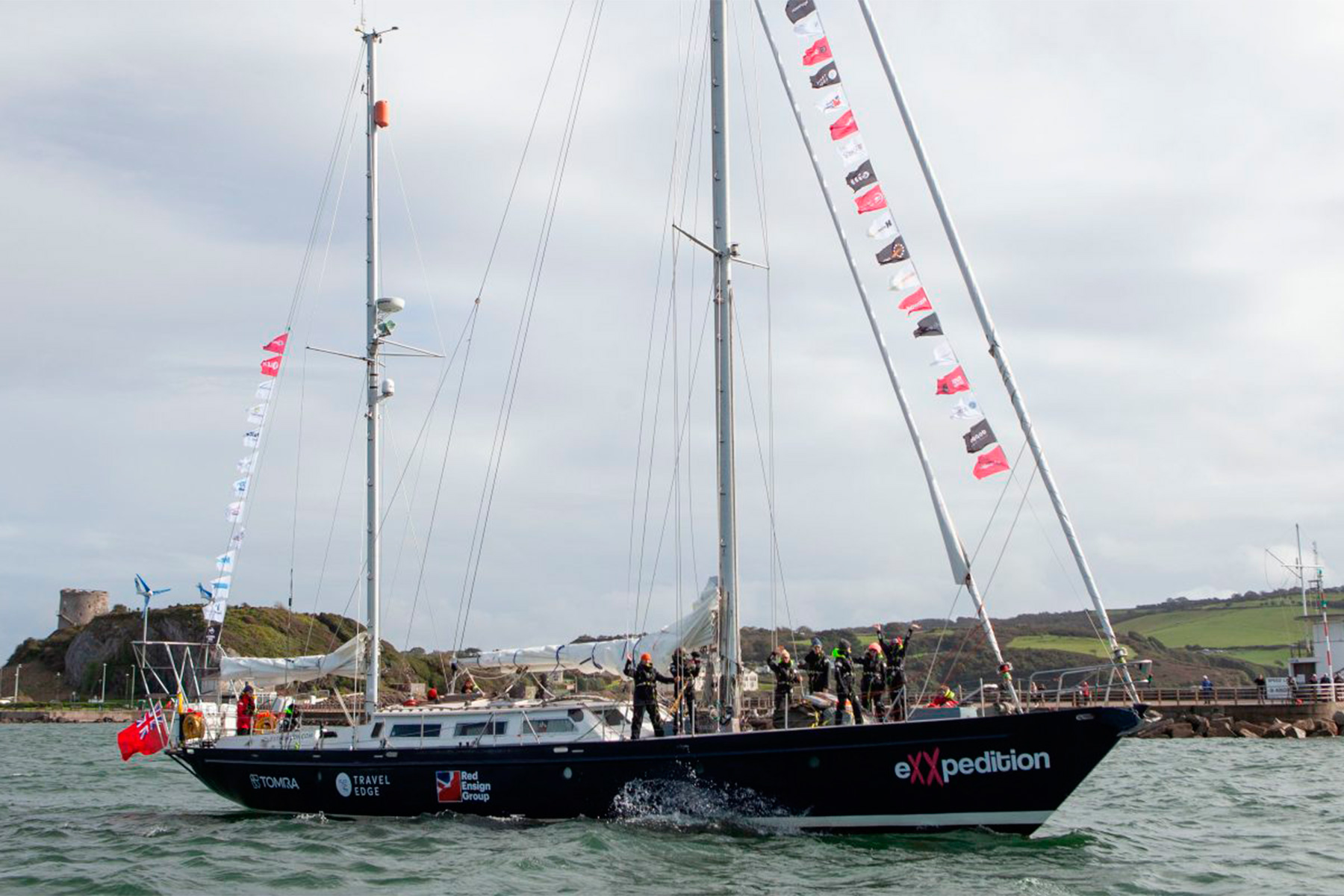 The eXXpedition Round the World Voyage and its Aims

During the voyage the crews will investigate the causes of and solutions to ocean plastic pollution, undertaking scientific research and taking part in workshops to explore how their skills and personal or professional situation can contribute to solutions. Opportunities for collaboration between crew members after their voyage are also explored, as eXXpedition’s powerful network of international ocean advocates grows. Each leg of the voyage has a legacy as guest crew members return to their normal lives equipped with the tools, understanding and confidence to effect change in their personal and professional networks.

Looking down on the bow from the mast head, photographed by Eleanor Church Lark Rise Pictures

“Each eXXpedition voyage is designed to encourage collaboration between crew members and community groups, and to open conversations around female leadership, personal and environmental awareness, and cultural and societal shifts.”

All activities, both at sea and on land at the various ports and locations visited, have three primary aims: to use science to support solutions to the ocean plastics problem through up-stream (land-based) actions, to shift perceptions, and to create a network of inspiring leaders.

Alongside eXXpedition Round the World’s mission to explore the impact of plastics and toxins in our oceans, this pioneering project is also addressing other important issues and opportunities. eXXpedition’s international all-female crews highlight the lack of diverse role models (in both race and gender) in both STEM professions and in the world of adventure and exploration, and serve to buck that trend.

The all-female make-up of eXXpedition Round the World also provides a platform to highlight the impact of unseen pollution in the environment on women’s health. There is a growing base of evidence linking the chemicals associated with plastics (and then how, when discarded plastics find their way into the oceans, how they absorb high concentrations of chemicals that can then bioaccumulate) with women’s health issues.
Alongside increasing the visibility of female role models and researching the impact on unseen pollutants, eXXpedition also aims to seek out the as-yet “unseen” solutions to the overarching problem of plastic pollution in the oceans; it is a complex issue that will require new and innovative solutions at every level, all over the world.

How Leap Are Supporting eXXpedition

Leap are proud supporters of eXXpedition as an official supplier through our “Grant for Good” programme; we gifted studio hours to eXXpedition, with our team creating the project’s website and we also host it on our Wunderism Ecohosting.

As I type, eXXpedition is in the middle of the Atlantic Ocean, halfway through Leg Two of the voyage from the Azores to Antigua. Their course will take them through the North Atlantic Gyre, and area of ocean-current-convergence where ocean litter accumulates. The around-the-world route of the voyage will take in four of the five gyres that exist in the world’s oceans, as well as visiting the Arctic to assess the impacts of ocean plastic pollution there.

This current Atlantic crossing will take them eighteen days, and can be tracked via the interactive map on their homepage that shows an icon of the S.V. Traveledge at its current position on its planned route.

Keep Up To Date With Exxpedition

Alongside the interactive boat tracker, the crew are posting daily articles to their blog, with articles ranging from “ship’s log” posts about life onboard, through features on the scientific research being undertaken, to accounts of the different projects that the crews are involved with at each of their stops.  You can also follow eXXpedition’s progress on Facebook, Instagram and Twitter.

We’re incredibly proud to be supporting eXXpedition and the fantastic work that their crews are doing, and will share more about their voyage and its findings over the next 23 months.